ABOUT THE TURTLE SERIES

The oncologist informed me I had a tumor sitting next to my heart the size of an orange. She said that I had a 50% chance of survival. I was 44 years old.

Chemotherapy primarily works by poisoning fast growing cancer cells and in doing so it wreaks havoc all over the body. One of my negative symptoms was a kind of anemia that reduced the oxygen to my brain. While the chemo brings you down you’re given steroids to get you up. The result is a steroid/chemo haze generally called “chemo brain.” In my haze I wrote on my guitar, or should I say, repeatedly slammed out “Three Chords That I Like.”

Needless to say the song had three chords, only five words, and I sang it loudly. It was horrifying, but this song was the first step to figuring out my turtle series of paintings.

I gave myself an assignment: Use three elements that would appear in each painting, to hold a series together.

WHY TURTLES? – PART A

Until this point in my life, I had primarily lived in New York City and did not have much contact with nature or the wild. When I was 26 years old I visited friends in the Caribbean. My island friend Ray said, “Man, if you can catch a turtle you will get a ride, man”. While snorkeling I encountered a sea turtle and tried to catch “her.” She allowed me to get as close as a couple of inches away, but never touch. We swam together for half an hour, and then she rapidly vanished off into a distant depth. Alone, I found myself awed by her playful intelligence, humbled by her dominance of the environment, hypnotized by her graceful moves, dazzled by her beauty and stunned by my ignorance.

Years later I saw a painting by Renee Magritte, Le Jouer Secret (1927), where in his seminal surrealist way he portrayed a leatherback turtle floating above a cricket match.

Soon after seeing the Magritte painting, I was walking past the Barnes and Noble Bookstore on Astor Place, NYC when I spotted a poster by Marshall Arisman, my art college teacher. It was a stunning image of a man’s head exploding into a bright yellow aura as a turtle floated past him. This was the tipping point. I could not help seeing the connection between these two paintings and what I was to start creating myself.

After two years of chemo I was declared cured. It had been a rough two years with nightmare struggles. But the struggles weren’t over—my first wife left me soon after my final treatments. Though my life had been given back to me, it was going to be different.

I was alone for five whole days and then I met Joan. Four months passed and I asked her to marry me. A month after my engagement to Joan she told me she wasn’t suffering jet lag from a London business trip, but that we were going to have a baby. This is a surprise. I was told my course of chemo was so intense it would leave me sterile for ten years. Life was moving on—fast.

I continued to do the work on the “Turtle Series”. As it progressed, I could see autobiographical allegories emerge. I started to wonder why I was so comfortable painting these creatures and having them tell my stories. I start to search for reasons why this series was so easy to connect with.

A turtle was my first pet-like animal. In the 1950’s almost every kid had one until the second week, when it died. Intellectually this just did not seem like enough history to hinge all this work on.

Though I like the tension/juxtaposition created by using what I consider to be a borderline pet as a warm and fuzzy affectionate symbol, I eventually discovered the book “Biophilia Hypothesis” by E.O. Wilson. Very simply put, humans have coexisted closely with animals until as recently as 200 years ago pre-industrial revolution.

We evolved as creatures deeply enmeshed with the intricacies of nature, and still have this affinity with nature ingrained in our genotype today. Wilson supported his theory with scientific accounts of human and other species interrelations that read more like fables than reality. The more I read the more I saw the connection to the work I am doing. To date this is the easiest and most personal connection I have had with my work. It seems only natural to paint my family in the context of this beautiful mythically iconic creature. Lifespan aside, I feel these paintings give me an immortality that my children will pass onto their children. These pictures are my stories. The more of this work I do the longer I live. 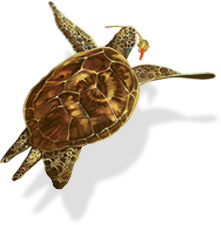