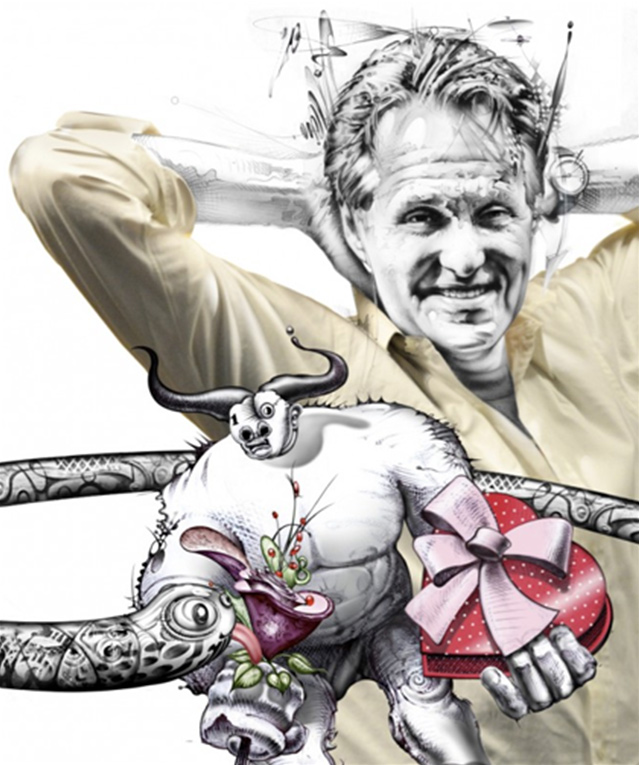 Self portrait of Victor with some of his creations.

Born in Brooklyn, New York, Victor Stabin became an artist in narrative painting, an interest and talent he pursued from his teenage years while studying at the Art Students League in New York, the High School of Art and Design, the Art Center College of Design and the School of Visual Arts. His work is inspired by many facets of his own life including his family, an interest in the connection between man and nature, water and the water’s edge, doodling, 20th Century Surrealists, the 19th Century Japanese watercolor print artists, Advertising Art, Graphic Arts and Modern Art of the 20th Century, the spirit of the Italian Renaissance, and the fragility of life.

A few years after leaving the School of Visual Arts, Victor was hired by Marshall Arisman to teach ‘Conceptual Thinking for Illustrators’ at the school. Shortly thereafter, his illustrations began appearing in publications like Time, Newsweek, and Rolling Stone. His credits also include nine postage stamps commissioned by the US Postal service, a mural for RCA/BMG’s headquarters, the cover of the KISS album, “Unmasked”, most recently he has had four pieces installed at radio station WNYC and his ABC Book Daedal Doodle is on sale at the Metropolitan Museum of Art.

Despite the consistency in his achievements, in 1999, Victor was forced to slow down and refocus both his personal life and his artistic creations when he was diagnosed with non-Hodgkin’s Lymphoma. His life expectancy was only 50%, with two years of intensive chemotherapy to follow. Though he lives cancer-free today, the reminder of life’s frailties has only stood to sharpen and refine the talent and priorities that began in childhood. 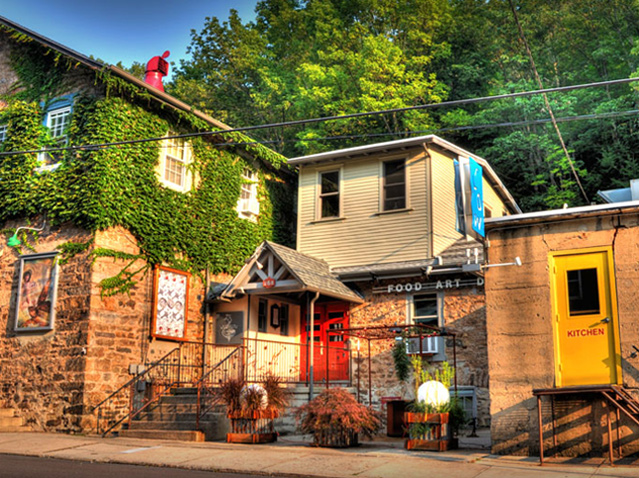 In 2003, Victor moved to the small northeastern Pennsylvania hamlet of Jim Thorpe, where he and his wife, Joan Morykin, purchased a 200-year-old/15,000 square foot building that had housed everything from a wire mill to a toy factory. It was in serious disrepair at the time of purchase, but over the next four years, Victor and Joan would convert the abandoned building into a thriving art factory.

In addition to being Victor’s studio, the Stabin Museum Building, (formerly called the Carbon County Cultural Project) is an artistic and creative hub that houses The Victor Stabin Gallery (where Victor’s original paintings are on display in the main room), the Dynasty and Arisman Galleries (which contain the work of his children and students), Cafe Arielle Restaurant, The Thing Shop, and the Jazz Loft. In addition, there is a weekend rental loft and a large studio space designed as a visiting artists’ workshop.  The Stabin Museum Building, first a vision of Joan’s, was designed to bring a variety of cultural disciplines such as art, music, and theatre the greater Carbon County area. 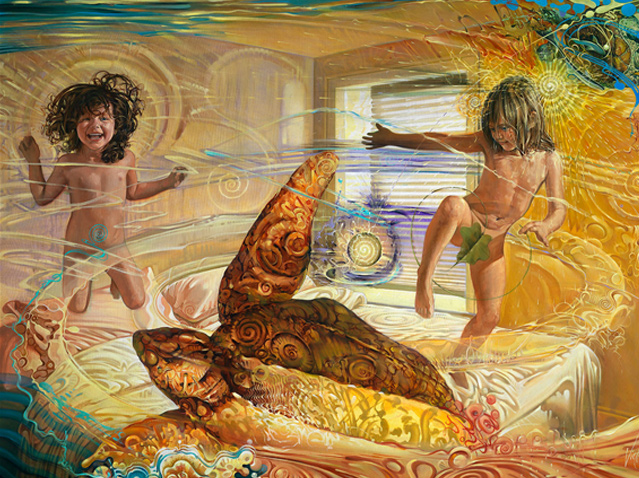 “Hatchlings” from the Turtle Series.

After moving to Jim Thorpe, Victor decided to remove himself from the constraints of illustration, and he began dedicating his time to painting. His thematic decision was largely guided by two paintings: Le Joueur Secret, an oil painting by René Magritte, in which a leatherback turtle is portrayed floating above a cricket match. The other painting is a poster by Marshal Arisman, a former teacher of Victor’s. It depicts another turtle floating past a man’s head, which is surrounded by a bright yellow aura.

With these two works in mind, Victor was inspired to create The Turtle Series, a suite of oil paintings, using turtles as autobiographical allegories. As the series unfolded, he discovered a connection to the natural world and found he had a taste for visual storytelling.

More About the Turtle Series 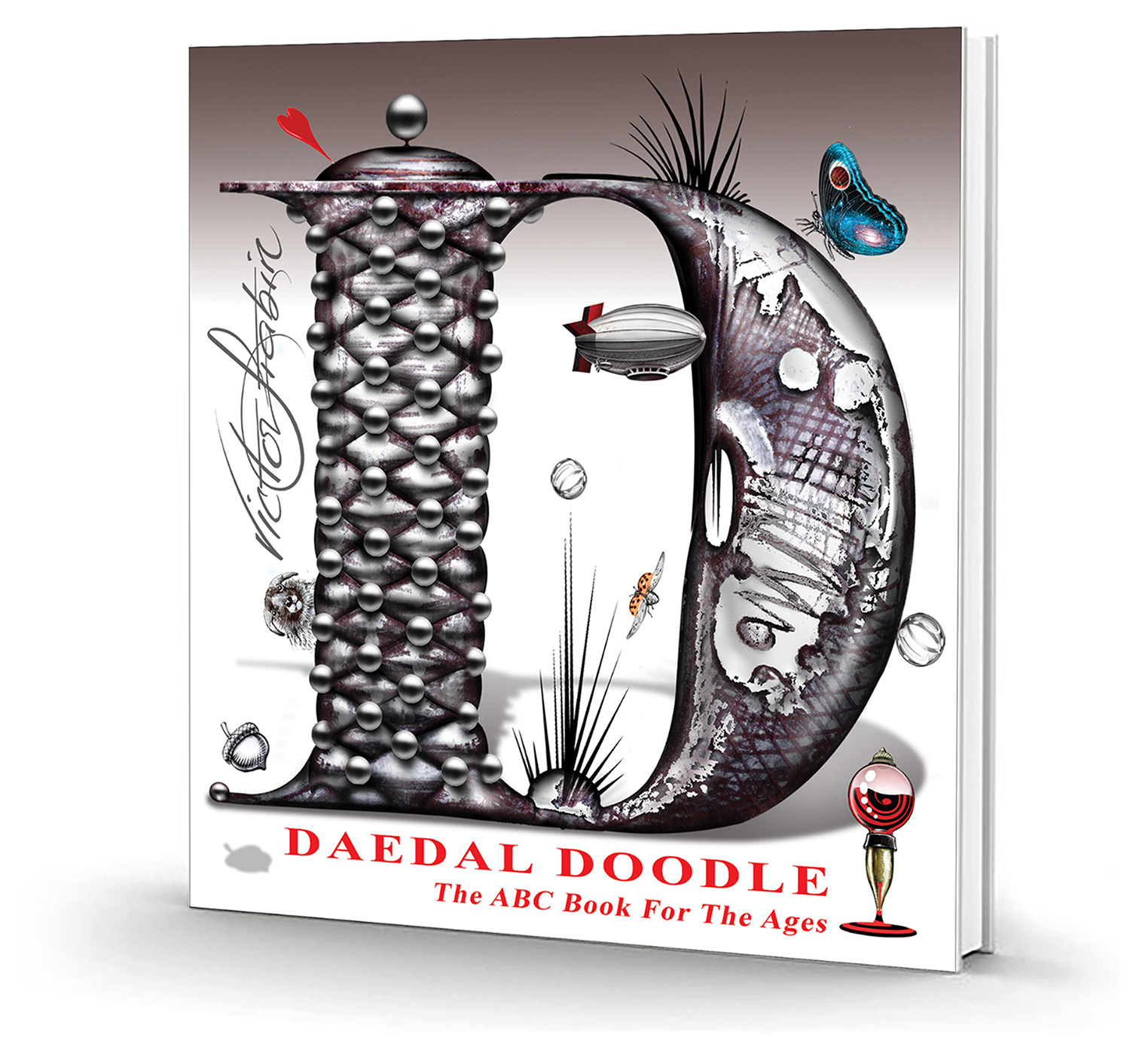 One afternoon, Victor taught his two-year-old daughter to repeat the phrase, “My daddy is a megalomaniac,” which enlightened him to the obvious fact that children are capable of using advanced words. They often simply lack the encouragement from adults to do so.

After reading various ABC books to his daughters, Skyler and Arielle, Victor became disappointed in the lack of substantive literature offered to children of their age. He decided to create his own.

Fueled by the love he felt for his children, drawing, and the dictionary, Victor began combing through the pages of the Oxford English, Merriam Webster, and Chambers Concise in search of alliterative couplets that would work well with illustrative narratives. The result is a whimsical revue of 26 characters known as Daedal Doodle.

The book was released in 2011 and was immediately well-received, winning noteworthy praise and awards for its design. Leonard Lopate of WNYC radio deemed the book “A visual stunner with thoughtful definitions” and Wharton Professor, Jeremy Siegel, stated, “Looking at the book reminds me of the first time I saw the work of M.C. Escher.” Editor-in-Chief of MacMillan Dictionary wrote a piece on Daedal Doodle entitled, “An Alliterative ABC,” in which he describes the book as an assemblage of “bizarre alliterations accompanied by surreal illustrations.” 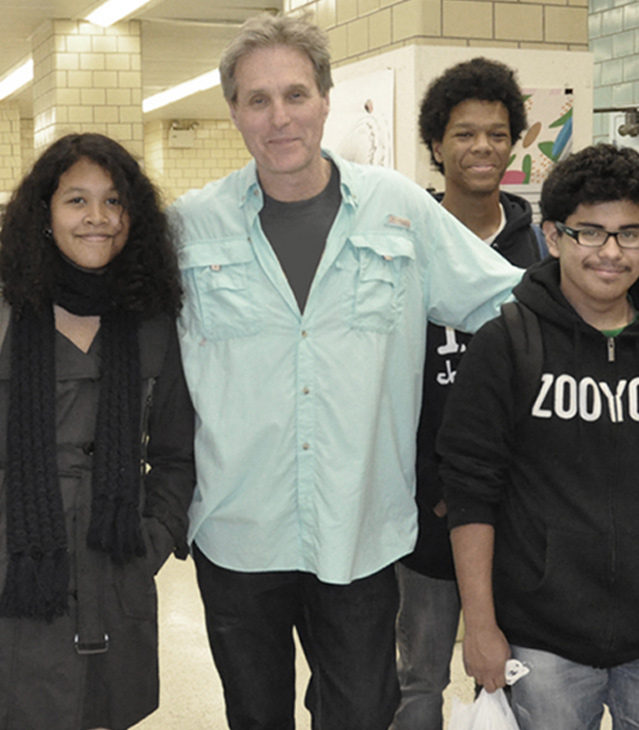 Victor with students from his class.

In 2011, Victor was invited by the Allentown Art Museum to begin a teaching residency. He gave a presentation to a large group of local students, after which, the students chose to take a course with Victor in the next semester.

Though still unsure of what curriculum he might use, he introduced a broad sampling of his work to the group and waited to see how many students would become part of his class. Twenty-six students enrolled, and Victor decided to have the class create their own ABC book, one letter per student.

The lesson plan included his own creative process for Daedal Doodle. Each student was assigned a letter and the accompanying section of the dictionary. The goal was to use unfamiliar words to create alliterations that loaned themselves to illustrations.

The students quickly embraced the idea, and by the end of the 10-week course, they had created their own ABC book published under the title, Daedal Doodle 2.0. The Art Museum then turned the results into an exhibit that featured both Victor’s and the class’ original illustrations from their respective books.

Shortly after his work with the Allentown Art Museum, The Metropolitan Museum of Art commissioned Victor to teach his process to young people in a program called “ARText: Linking Line and Language”. Victor has also been awarded several grants from the National Endowment for the Arts, which has allowed him to continue his Daedal Doodle curriculum.

Victor begins his next residency at The High School of Art and Design, where he was also once a student. There, he will teach his unique creative process for two semesters with the expectation that students’ work will culminate in the publication of their ABC book.